HUGE DAM IS BEING BUILT OVER THE PORT WINE REGION, IN PORTUGAL 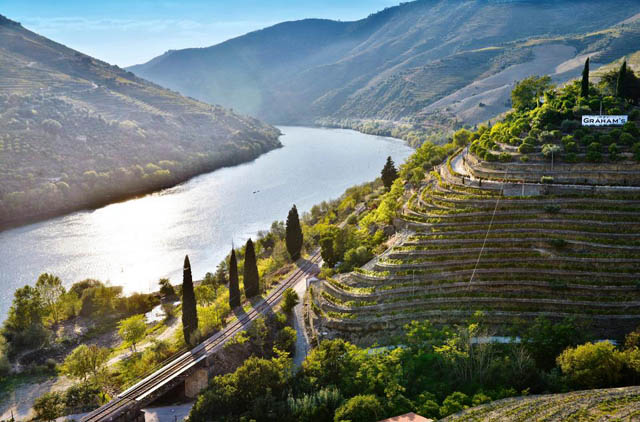 The harrowing sight has appeared close to the vineyards belonging to the Symington family, one of the world’s most prestigious wine houses in the north of Portugal.

A thousand contractors are working at the construction site of a dam in the Douro river valley, where it meets the Tua river. Large pieces of rock have been carved out of the stone for the over a hundred meters high dam wall. Heavy-duty trucks thunder up the windy roads.

“The construction site is a gigantic and horrible,” condemns Paul Symington, the front man of the family owned Symington Estates.

The Portuguese government has decided to harness the power of the deep mountain valley river Tua for electricity production. The power plant will be built partly on the ancient upper Douro wine-growing region, which is a UNESCO World Heritage Site.

The dam, known as Foz Tua should be ready in two years time. The dam is part of the Portuguese large-scale national hydropower program. Ten large power plants  are planned or already being constructed, by 2020.  Such large dam constructions are exceptional in EU countries, Aalto University Professor Peter Lund of Helsinki says.

“Large-scale hydropower construction is actually discontinued the European western democracies due to concerns over land use and the environment. Large dams generally only now built in developing countries, where energy production starts from zero, Lund, an expert on energy policy, says.

The Foz Tuan power plant is being built in a region, celebrated for its port wine. When renowned wine producers found out about the construction they started to put pressure on the government and UNESCO to cancel the contract, together with environmental organizations. Threats from UNESCO stopped the construction site for ten months, but the power plant finally got permission to continue a year ago.

The  Symingtons dominate a the third of the world market of port wine in. The of the key farming areas, dating back to the 1700s are spread over the hills on both side of the Tua. Steep terraced slopes are used to cultivate the grapes used for the Graham’s brand Port wine.

Some of the opponents to the construction of the dam fear that the artificial lake which will soon tower behind the dam will threaten the delicate micro-climate or the region and expose the grapes to mould diseases. The Symingtons don’t believe there is convincing scientific evidence to support this.

” We are worried about the environment. I often hike in the Tuan valley, considered one of the world’s most beautiful areas. It will be covered by water. And how damaging will it be for the heritage site to have a huge, ugly concrete dam wall and high voltage poles crossing it,” Paul Symington argues.

If Portugal is the exception in the EU, others still believe in hydropower.  Outside the EU, more than five hundred large hydroelectric plants are planned in the Balkans. The rivers of poor Albania are being harnessed supported by loans from the European Development Bank and the World Bank.

Portugal has also impoverished dramatically over recent years due to over-indebtedness. The Ministry for the Environmental and Energy justifies the growth in hydroelectric power by an increase in self-sufficiency and savings. Portugal has to import expensive fuel oil. The less you need it for electricity, the lower the carbon dioxide emissions.

Wind power, on the other hand, is already producing a quarter of the electricity in Portugal. “Portugal must be praised for this. Of the EU countries, only Denmark is ahead,” Lund points out.

But the harder the wind blows, the cheaper the electricity is for consumers and the energy company’s revenues are reduced. Hydropower companies, however, will be able to price profitably, the Finnish professor believes.

For this country in crisis, investments are important. Portugal received over 635 million euro in advance payments from the power companies for licenses. The fudns were used to patch the budget deficit.

In addition to the debt crisis, China looms in the backgrund. Portugal’s largest company, the power company EDP was purchased by Chinese investors in the midst of the debt crisis some three years ago. China’s state owned flamboyant Three Gorges Group acquired the Portuguese State’s share with EUR 2.7 billion and promised to invest an additional two billion more in the EDP.

Out of this, some EUR 370 million is spent in Foz Tua.

“The dam will become a tourist attraction”, EDP’s project manager Paulo Figueira boasts in the middle of the busy construction site.

He leads the way into acgaping hole tunnel in the slope. The power plant machinery will be placed here, almost completely hidden in the rock as a concession to the opponents. The internationally reknowlned architect, Eduardo Souto de Moura, leads the planning the of the building.

“The dam reservoir will begin to attract people to go fishing and boating. We are helping to create jobs”, the project leader believes.

The project manager emphasizes that power plants are part of the Douro wine region. The river has been domesticated since the 1950s. Stemming has restrained floods and the flow has become possible to travel by boat. In the past, only boats transporting port wine barrels were able to travel the river to the Atlantic coast.

Paulo Figueira does not believe anything will stop the construction site. But a little further away from the Douro river, wine producer João Roquette insists he will continue the struggle.

“An unfinished dam can be blow away with dynamite,” he says, standing on the Esporão family-owned farms.

In Roquette’s view, the example could be taken from the United States, where useless hydroelectric power plants are being. “Twenty years from now the sun will produce electricity for Portugal at prices so low, and what will we do with all these dams,” he says.

Um comentário a “HUGE DAM IS BEING BUILT OVER THE PORT WINE REGION, IN PORTUGAL”

Clique aqui para cancelar a resposta.
The mission of Platform Save the Tua is to protect the Tua Valley by raising awareness about the inconsistencies of the Foz Tua dam, which is being constructed in one of the most beautiful rivers in Portugal, with the values abided by Unesco World Heritage nomination of the Alto Douro Wine Region. We demand for this construction to stop immediately before a natural heritage spot of a high ecological, social and economic value and part of our legacy and Portuguese identity and culture suffers irreversible damages.